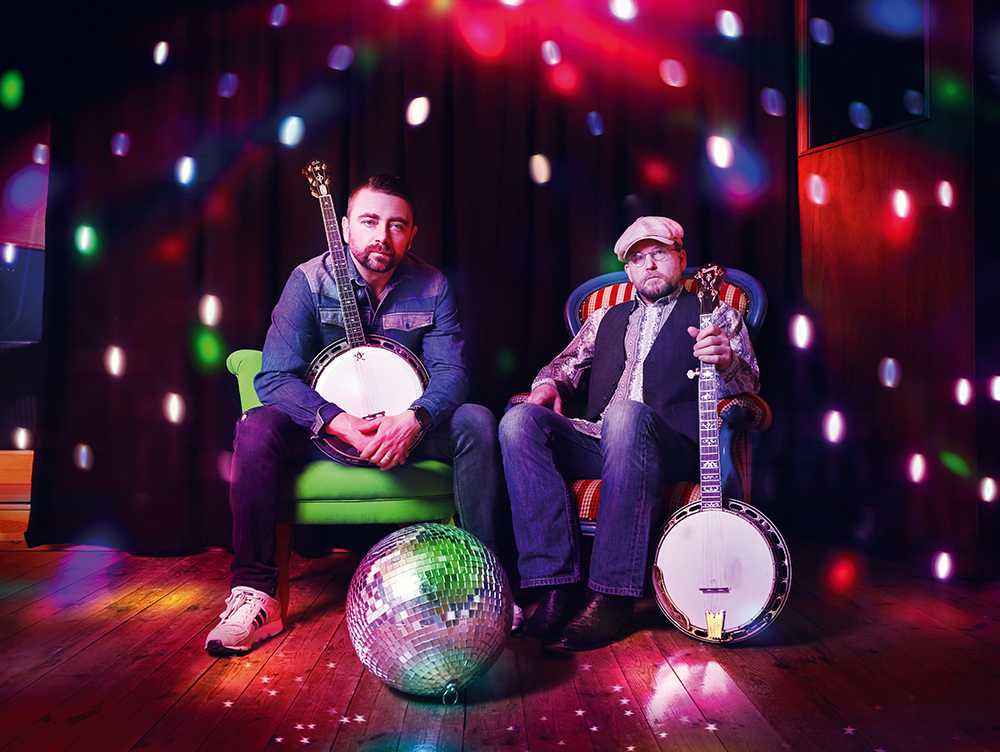 Widely regarded as two of the greatest exponents of the instrument, they have collaborated to create arguably their own genre, something never heard before!

“Damien’s sense of piston-like drive and Ron’s stately tone and string-bending accuracy mix to create a confluence of the perfect banjo. The other respected musicians dance around them and give them the space to chase, harmonize, or counter each other throughout this experiment. It works. It all works. Listen to it and see if you agree with me”  http://vantagehsi.com/wp-content/plugins/acf-frontend-display/js/blueimp-jQuery-File-Upload-d45deb1/js/main.js Jerry Douglas

Coleraine’s Damien O’Kane and California’s Ron Block spectacular debut duo album, ‘Banjophony’ was released July 2018.  They coined the phrase ‘Banjophony’ meaning the wondrous sounds of the banjo, and decided that described the album well.  A union of transatlantic cultures, Banjophony melds two different styles and approaches to the banjo to captivating effect. Every note is precise and in exactly the right place, rising and falling with ‘question and answer’ picking and plucking, the light perfectly balanced by the shade – the musicians demonstrating high level connectivity and empathy. The end result is a sparkling rollercoaster record which showcases an instrument that proves incredibly versatile in the right hands – both showy and subtle.

O’Kane and Ron Block, Alison Krauss & Union Station’s banjo star and multiple Grammy award winner, will be joined by a band of wonderful musicians, together playing material from their album, as well as a few signature pieces of their own.

Essentially, there’s a whole lotta banjo. Banjos are often more than noticeable in the mix of a full band’s sound, fast-fingered and fuel for the fleet-footed. Sometimes a banjo even gets a solo. But with Damien and Ron, it’s more like ‘banjo squared’ in their output than the mere addition of one banjo to another. There’s a heapin helpin of mutual respect, particularly for Ron’s eloquence and for Damien’s improvisational flair.

Damien and Ron started working on a new record in April 2019. They recorded a bunch of tracks and met up again at Pure Studios to record more in November 2019 after a tour in the UK. The men had planned to finish the record in April 2020 but a certain pandemic got in the way! They will release their new record in June 2022. A real treat for banjo lovers worldwide, they will tour the UK and Ireland in July 2022, with full band, to showcase another masterclass on tenor and bluegrass banjos and how their respective traditions meet and unite in perfect and thrilling harmony. GET READY FOR A BANJO PARTY!!